Next:
It Was Never About the Mileage

Steak in a Dorm

College dorm kitchens are filled with third-world prob­lems tran­scribed into extremely first-world contexts. These are defined by such ques­tions as, “what food can I afford to eat?” or, “how can I cook with what I’ve got?”

Unlike true third-world prob­lems, these are then elab­o­rated on by state­ments such as, “I’ve spent all my intern­ship money on robots” or “my fully-equipped Olympic Village suite kitchen might get smokey, setting off the fire alarm.”

Regard­less of how hurt your sense of enti­tle­ment may be by deep intro­spec­tion into your posi­tion on Maslow’s pyra­mid, the answer is steak.

Super­mar­ket meat totally works—you’re not going to go out of your way to support small busi­ness and cele­brate local farms by find­ing a butcher you can talk to, so you’ll be buying pre-cut, prepack­aged steaks from the super­mar­ket. Pro tip: Korean super­mar­kets price their beef accord­ing to Korean demand (i.e., kalbi or short rib), so they have great deals on tradi­tional West­ern steak cuts. Plus, H-Marts and Assi Plazas are surgi­cally clean. Damn, man.

USDA Choice—the USDA system rates beef on how much marbling (in-muscle fat) is in the beef, and Prime (the high­est level) is too expen­sive for you unless you’re rolling in dough. 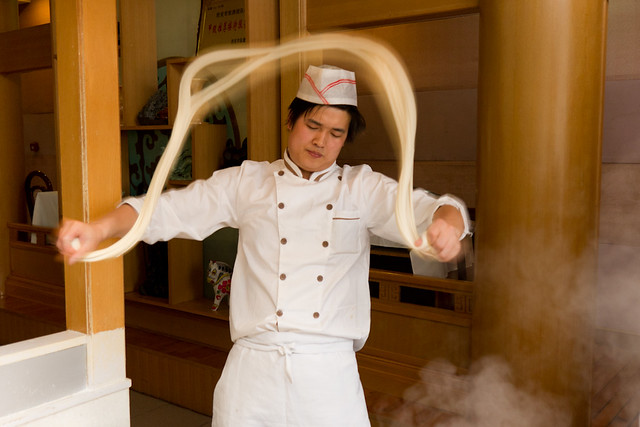 Meat flavor, espe­cially “beefi­ness,” is conveyed by melted fat, and lean ol’ USDA Select (the lowest level you’ll find at the meat aisle) just won’t deliver it. Choice, which is between Select and Prime, is a fine compro­mise between cost and deli­cious­ness.

Go bone­less—You’re too lazy to cut out the bones your­self, and you don’t want to pay for bones anyways. Plus, since you’ll be cook­ing with a pan, you don’t want the bone to prop up the meat away from the pan’s surface.

Tri-tip is another option, but I’ve yet to exper­i­ment with it.

Thick!—seri­ously, go for at least 1.25 inches of thick­ness. Steak is meant to be cooked unevenly; you want the inside to be medium rare (reddish-pink and juicy) and the outside charred and crusted. In between will be a region of well-done meat, and with a thicker slab of beef that region will be a smaller propor­tion of the total thick­ness.

Dump salt on it2.

For the purposes of this post, I’m using a 1.75-inch thick USDA Choice strip steak.

This is thick enough for it to stand on its edge. In fact, this is what exactly we’re going to do. Get your pan sizzling hot then smack the steak down edge-wise, fattest edge first.

It looks stupid, but remem­ber that fat is an insulator—it’s going to cook way slower than muscle will3. We’re giving it a head start by render­ing the beef, letting the molten fat baste flavor into the steak. Mean­while, the edge gets a nice sear4.

Next we’re going to go low and slow on the sides using butter as a cook­ing fat. If you’re a steak fanatic or a foodie, you’re prob­a­bly about to call the cops, but just trust me on this; I’m an engi­neer.

Frying steak in butter will arouse the atten­tions of all mid-sized carni­vores in a 50-meter radius. I am not respon­si­ble for any restrain­ing orders or child support payments5 result­ing from your use of this method and your sexy neigh­bors’ subse­quent siege of your kitchen.

We flip the steak as it cooks and spoon the cook­ing oil all over the crust of the steak.

Remem­ber that the strong emotions caused by bast­ing the beau­ti­ful brown crust of your meat are not those of intense rage, as I initially thought, but merely extreme nonsex­ual6 arousal.

After eight to ten minutes, the beef and dairy solids in the cook­ing fat begin to darken and burn beyond what will richen the flavor of the steak. At this point, trans­fer the steak to paper towels and dump the grease. Then (care­fully!) wipe the hot pan with more paper towels. We add more butter and return the steak to the pan for an agoniz­ing period of more cook­ing.

We remove the steak from heat and let it sit on a warm plate for half the time it took to cook. This is by far the most diffi­cult part of making a steak, by dint of the despair at not being able to tuck into your perfect creation.

It is also one of those subtle points glossed over by “meat + heat + eat,” as it notably involves neither heat nor eat.

The bulging of the steak should give you some idea of why it needs to rest. Your steak is a butter-covered balloon ready to burst, and will do so with even a simple slice across the grain, spilling precious juices all over.

Slice it up across the grain and go at it!

If you’re going to do do dorm steak, you might as well do a fancy dorm salad as well. I used the rest­ing time to broil frozen shrimp in a toaster oven with oil, salt, cumin, and turmeric, then tossed them into a bed of kale driz­zled with balsamic and olive oil. Dorm folks take note: shrimp and kale will keep for weeks to months in your freezer or fridge (resp.) with­out loss of flavor or texture.

Now, because you’re a filthy college student and your disgust­ing super­mar­ket steak is only medium rare, it’s poten­tially crawl­ing with bacte­ria. It’s best to use alco­hol to disin­fect your food as you eat. Given that you prob­a­bly don’t like wine (yet), I recom­mend a Doppel­bock or a strong lager.

I cooked dorm steak in a complex process involv­ing ghetto sous vide, a hefty propane torch, and (just that once) a fire alarm. That is, I did until I read Alain Ducasse’s column for the NY Times:

I do not use very high heat, because you get good carameliza­tion in that amount of time. I’m not inter­ested in carboniz­ing the surface of the meat. To me that ruins the flavor.

His method, involv­ing render­ing and a fright­en­ing amount of beurre (butter), was mind-blow­ing to me. My skep­ti­cism was soon over­come when I flipped my first buttery slab of beef, and was driven to tears by a crust gorgeous beyond any of my wildest fantasies involv­ing mammal flesh.

Thank you, M. Ducasse. I’m putting away the blow­torch.

Hi, I troll engi­neer firmware, soft­ware, silken­ware, and extra firmware at Google. I’m your friend from Stuy and Geor­gia Tech. Or you might know me from Apple, Inven­tion Studio, Solid Angle, and Science Olympiad. You can find me in San Fran­cisco on a motor­cy­cle, explod­ing circuit boards.